Experiencing a monthly period is something all women go through. However, having a heavy menstrual cycle can be extremely painful, can interfere with your life, and can indicate that you have a an underlying health concern or condition.

This type of endometrial ablation uses saline (salt water) to treat the uterine lining, or endometrium. Once treated, most women no longer experience the symptoms or effects of a heavy period. In fact, many women stop having their period altogether.

You no longer have to suffer with the pain and disruption of heavy periods every month. schedule an appointment with our Perrysburg area gynecologist and women’s health nurse practitioners to see if saline endometrial ablation is right for you.

What Conditions Does Saline
Endometrial Ablation for
Heavy Periods Treat?

Women CanNOT Have Saline
Endometrial Ablation for
Heavy Periods if:

What is Saline Endometrial Ablation?

Saline endometrial ablation is a minimally invasive procedure that treats heavy periods, by removing the lining of a woman’s uterus.

No incision is required for endometrial ablation, so recovery time is very quick, with little to no risk of infection or complications.

The doctor performs the procedure by circulating heated salt water (saline) within the patient’s uterus for about 10 minutes. This method has many advantages, including the fact that it can be performed on women who have an irregular-shaped uterus and/or who have abnormal tissue growth such as fibroids.

Complete results might take a few months to see. However, almost all patients will have substantially lighter periods, and some women will stop having periods entirely.

It is important to understand that while endometrial ablation may stop periods, it is NOT a sterilization procedure. Women should be careful to use contraception after this treatment, since pregnancy may still be possible. Pregnancy after endometrial ablation is hazardous and can end in miscarriage. 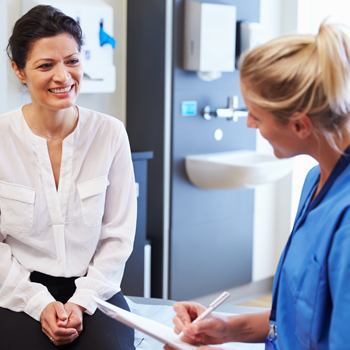